Twenty “listeners” met and spoke to prisoners suffering from depression and mental health problems, including some who were suicidal.

Details of the number of calls have been released to mark the 10th anniversary of the scheme.

It operates in Maghaberry and Magilligan prisons.

There are currently more than 1,300 prisoners in the two jails.

The prison authorities have been strongly criticised in a series of inspection reports for treatment of vulnerable prisoners, including those with mental health problems. 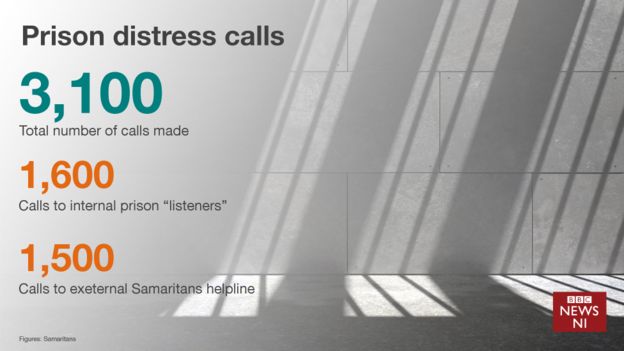 The scheme is run by the Samaritans, who provide a 12-week training course for prisoners who pass an initial selection and vetting process.

Volunteers working for the charity outside the prison answered a further 1,500 telephone calls from prisoners in Northern Ireland last year.

The Listener scheme has been operating for 25 years in prisons across the United Kingdom and Ireland.

The Samaritans said it is essential because research shows that prisoners are eight to 10 times more likely to die by suicide than the rest of the population.

According to the charity, around 23% of male prisoners and 46% of women prisoners suffer from anxiety and depression.

The first Listener programme in Northern Ireland began operating in Magilligan prison near Limavady in 2002.

The scheme in Maghaberry started in 2006.

A programme for women prisoners and young offenders is being developed at Hydebank in south Belfast.

She said it works well because many prisoners prefer to talk to fellow prisoners.

“The prisoners who are suffering emotional distress know that the Listeners know what life in prison is like and know what they are going through,” she said.

She believes those who volunteer to help their fellow inmates also benefit.

“I think there is something very redemptive about the process in that people who are in prison for punishment are being given a chance and are being trusted,” she said.

“That can be really restorative for an individual to see that the people around them don’t stigmatise them but trust them to provide this service.”

A number of former Listeners have continued to help the Samaritans after being released from jail by helping to train volunteers dealing with calls from prisoners.